live a tennis experience with Daniel Panajotti, one of the best coaches in Italy

live a tennis experience with Daniel Panajotti, one of the best coaches in Italy

The philosophy behind one of the best Tennis Coach in Italy.

… is the service essential? Yes, it is the most important shot without a doubt to aspire to reach the top of high level tennis.
…without the knowledge of how to manage good the effects (top-spin and slice) our pupil can be incomplete, without varieties or creativity, and will not have resources to resolve problems.
…we have to learn our pupils to THINK in the tennis court, everyday, in every training.
…we have to give them opinions, varieties, take them problems that they should resolve, also making some mistakes, but the most important thing is that they will learn to take their own decisions without depending from no one.

Our work is only to guide them.

… we teach our pupils to use all the tennis court; not only a single part of it.
…if a tennis player doesn’t have INTENSITY and a lot of ENERGY he won’t be able to win, even if he is a talented player.
…when can we say that a player we train can make something very good? This is very easy to say: when he is able to execute it almost good under an extreme pressure.
…we don’t talk about power without having developed the control, the precision, and the throw profundity.
…to teach angles is fundamental since the player is a child, short and long angles; then, all tactic varieties can be incorporated easily.
… always in the transcendental moments of a match, you have to do what we do best, never invent.
….forming high-level tennis players is an art, it’s like painting a picture, modeling a sculpture; it takes time, dedication, patience and a lot of wisdom.
…hit the ball, hit so many, control it, dominate it … few.
…high speed precision is one of the most important qualities of a good player.
…if a player does not defend himself correctly, he will not be an intelligent agonist.
…a good defense, can overcome a good attack (Nadal teaches)
… we define the attack as the art of recognizing when to take the initiative during the point and above all, the understanding of how to do it.
… to get to the top it is not enough to have only one weapon, I consider that each player must have at least 3 blunt elements to close the plays and mark a difference with the opponent.
…cleanliness in hitting the ball, separating the good players from the rest beyond the power.
…we want our players to impose respect on their opponents, whether with a combative attitude, a great solidity or through the power of blows, otherwise it is impossible to win difficult games.

The mission is to guide and support each player regardless of their level or age, helping them to develop their own project.

The aim is to transfer these concepts to the service of young people to promote high quality sports education through the experience accumulated over the years as a Master / Coach.
The philosophy of the Coach is based on the production of results taking into account that the performance can only be achieved if within each of us there is a goal.

The results of each activity depend very much on a project.

Our project starts from the idea of ​​bringing out the best of every player in every circumstance, during training or during the match. This concept must also be transferred to other activities, outside the tennis courts, in order to achieve a healthy lifestyle.
To get the best out of their resources and skills, each individual will have to focus their energies on what they do best. The results are difficult to predict and the only parameters to achieve high performance are the daily effort and the right mental attitude to get the best every day.
Our project also wants to involve the family of each player. There are those who claim that the contribution of parents can be harmful, we think that a balanced support of the family is a fundamental factor in the project to achieve its goals.
The whole team shares this vision and will try to convey to the players the best for the right technical, physical and mental work. 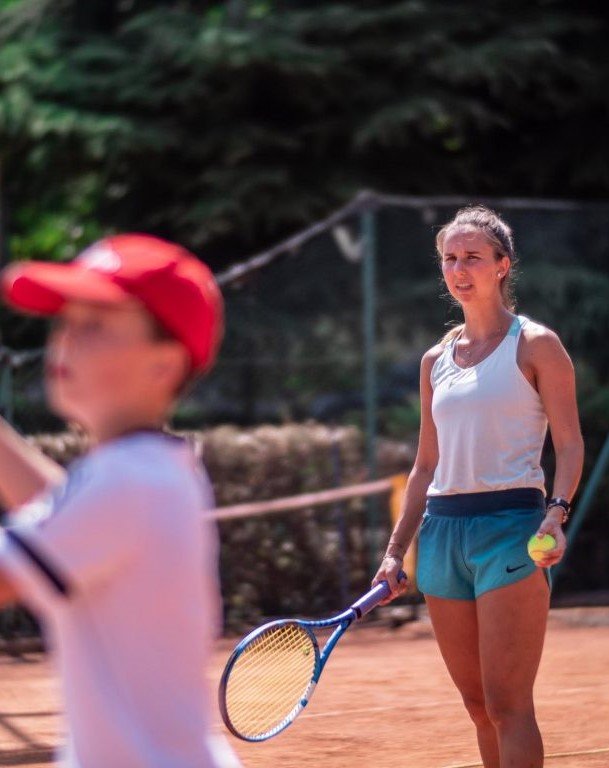 For the athletic preparation of his students the Daniel Panajotti Tennis Academy has made an agreement with the prestigious Athleta gym of Pino Pascucci. The gym is located a short distance from the Academy, in Via Edison, 8, in S. Pietro in Cariano. The students of the academy will follow tailor-made programs in synergy with the work of Coach Daniel Panajotti. The Athleta gym is one of the most important in the area, with a very wide offer that also includes the Filanthos beauty center.

The Daniel Panajotti Tennis Academy is located in San Floriano, near San Pietro in Cariano. Surrounded by the nature of this magnificent location, the academy is equipped with indoor and outdoor fields, to complete the structure there is a swimming pool. Furthermore, in keeping with the excellent culinary tradition of the area, the restaurant “Terzo Tempo” is located within the same structure.

Founded in the 70s by Perez Roldan in the Tandil Independiente Club, it is the most prolific school in the world in tennis player training.
Only the Perez Roldan’s school, which invented the Tandil® Method, can boast of having created tennis players from the first day up to professionalism, over the years, 8 players who started playing following the Tandil® Method, have reached the rankings top 100, of these, one entered the top 30, two in the first 20 and finally two in the top ten, and a winner of the US Open.

Perez Roldan created a working method to train tennis champions that he transmitted to successive generations of coaches who in turn had been trained by him.

TS TENNIS COLLEGE – SCHOLARSHIPS, UNIVERSITIES AND TENNIS IN THE USA

The service offered by TS College Tennis consists of a complete assistance for players and players who intend to continue their studies, but who at the same time wish to continue their tennis activity, to obtain a scholarship at an American university.
Thanks to the professionalism of its collaborators and the numerous contacts with coaches of US universities, TS College Tennis aims to find the perfect college for every tennis player!

Everything is studied in detail, our assistance covers everything you need to enter a college.

Fill the contact form below, we will be back to you as soon as possible.

This is how to get in contact Daniel Panajotti Tennis Academy